If you’ve been on my website before, you’ve probably read that I use EEG in my research, and perhaps thought I was excitedly spelling “eggs” the wrong way. As exciting as this would be, that unfortunately isn’t what’s happening. EEG is short for electroencephalography, which is a non-invasive neuroimaging technique.

So like, what does that sentence actually mean? electro-encephalo-graphy is basically Latin for “electric brain writing” (which, coincidentally, sounds WAY more metal than EEG). Non-invasive neuroimaging means that we can observe the dynamics of your brain without cutting it open. How? With electricity!

Your brain, like your phone or computer, communicates within itself electrically (and also chemically, but that’s a story for another day). This means that if we put electrodes, which measure current, on top of your head, which is attached to your neck, we can pick up a teeeeeny tiny electrical current- this is your brain talking! A box called an amplifier does exactly what it sounds like it does- it amplifies the signal so that it’s actually observable to humans– kind of like a microscope. The amplifier sends these large signals to the computer, and voila! I can see your brain communicating on my computer screen. Still confused? Hopefully you are a Stranger Things fan, because a nice visual of EEG is Eleven with the Coke can in season 1.

Eleven is wearing an EEG cap in this scene.  There are a few things that are different about this scene and what it’s like to participate in one of my lab’s studies. A) Unfortunately, none of my participants have telekenisis… that I know of B) we are WAY less creepy and C) EEG technology has improved dramatically since the 80’s- a modern day EEG cap looks something like this:

What are you exactly measuring?

We are measuring, essentially, what you may hear referred to as “brain waves,” because they look kind of like waves. When they appear on our computer, they look like this:

Some complicated math that our computers do can break that big, complicated messy wave into a bunch of smaller waves that are overlayed on top of each other. The wave categories most scientists look at are delta, theta, alpha, beta, and gamma (not pictured). 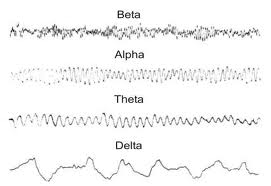 Contrary to popular belief, one wave doesn’t necessarily “mean” anything in particular- it depends a lot on the context and where in the brain it is coming from as to what it “means.” So, no, I can not “read your brain.” We can look at how much each of these oscillations are occurring in different parts of your brain. These are called frequency analyses.

There is another type of analysis you can do called an event-related potential. In this situation, the person with the EEG cap would be doing a very task on the computer (e.g. click whenever you see an O, but not when you see and X)- when these “events” happen, like when you see an O, the computer will mark it in the data. Later on, we can average all the activity around that event to get an average waveform. There are many different wave forms that can indicate many different things. I will discuss more of them at another time.

That’s cool. But like, what do we actually use EEG for?

EEG is used in many different scenarios. Clinical neuropsychologists may use it to help diagnose and understand medical conditions like seizures, deafness in infants, sleep conditions, etc. There is currently research going on that is trying to understand whether EEG can be used as a biomarker for schizophrenia, alzhiemer’s, and numerous other cognitive diseases.

As for us, cognitive neuroscientists, we use it to understand cognition more broadly. Using the scientific method, we are able to use EEG to better understand how vision, attention, memory, language, etc. all work. For example, my lab uses frequency analyses to discover how the brain changes when we spend time in nature; specifically, we look at the theta frequency in the midline (top middle part) of your brain. Scientists are still trying to figure out what exactly midline theta represents in the brain, but it is commonly associated with multitasking and cognitive exertion, suggesting that your brain may be less overloaded while outside.

Youtubing EEG would be a good place to get a visual as to what EEG actually is, and what it looks like.

If you are a college student or advanced high school student, I would recommend Steve Luck’s “An Introduction to the Event Related Potential”- buy it online or check to see if you local library has it!

View all posts by saralotemplio